I am listening to Dickens’ Bleak House on audiobook. I have mixed feelings about Dickens. On the one hand, a great many of his characters are caricatures: one-dimensional people with their vices or virtues so sharply exaggerated that they aren’t really human at all. In general, I think caricatures are a lazy way to tell a story. But I will confess that I have developed a weakness for Dickens’ caricatures, mostly because they are entertaining, and also because they are usually such biting satire– against Victorian English society, Dickens intended, but in fact I often find the satire to be quite prophetic, as applicable to areas of our modern American culture and society as it was to Dickens’ own.

Such is Mrs. Pardiggle, a minor character introduced in Chapter Eight of Bleak House. Mrs. Pardiggle is, in the words of another character, a person who does a little and makes a great deal of noise. She is an energetic, forceful, overpowering lady who has devoted herself (and her unwilling family) to the accomplishment of Good Works. She brings to mind C.S. Lewis’s quote, “She’s the sort of woman who lives for others. You can tell the others by their hunted expressions.” 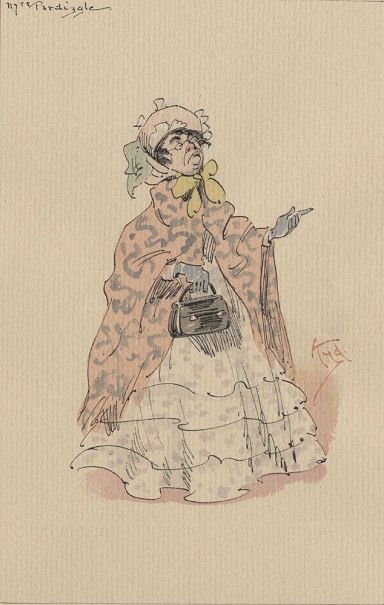 In Chapter Eight, Esther, the young woman who is the narrator, and her friend Ada, are induced by Mrs. Pardiggle to go with her on a charitable visit to a poor family in the area. Dickens sets the scene with his usual descriptive finesse.

Mrs. Pardiggle, leading the way with a great show of moral determination and talking with much volubility about the untidy habits of the people (though I doubted if the best of us could have been tidy in such a place), conducted us into a cottage at the farthest corner, the ground-floor room of which we nearly filled. Besides ourselves, there were in this damp, offensive room a woman with a black eye, nursing a poor little gasping baby by the fire; a man, all stained with clay and mud and looking very dissipated, lying at full length on the ground, smoking a pipe; a powerful young man fastening a collar on a dog; and a bold girl doing some kind of washing in very dirty water. They all looked up at us as we came in, and the woman seemed to turn her face towards the fire as if to hide her bruised eye; nobody gave us any welcome.

“Well, my friends,” said Mrs. Pardiggle, but her voice had not a friendly sound, I thought; it was much too business-like and systematic. “How do you do, all of you? I am here again. I told you, you couldn’t tire me, you know. I am fond of hard work, and am true to my word.”

Unsurprisingly, Mrs. Pardiggle is not greeted with any enthusiasm by anyone in the house. After a bit of back-and-forth, in which it is made clear that Mrs. Pardiggle is going to ask lots of prying questions, the father of the family bursts out:

“I’ll save you the trouble. Is my daughter a-washin? Yes, she IS a-washin. Look at the water. Smell it! That’s wot we drinks. How do you like it, and what do you think of gin instead! An’t my place dirty? Yes, it is dirty—it’s nat’rally dirty, and it’s nat’rally onwholesome; and we’ve had five dirty and onwholesome children, as is all dead infants, and so much the better for them, and for us besides. Have I read the little book wot you left? No, I an’t read the little book wot you left. There an’t nobody here as knows how to read it; and if there wos, it wouldn’t be suitable to me. It’s a book fit for a babby, and I’m not a babby. If you was to leave me a doll, I shouldn’t nuss it. How have I been conducting of myself? Why, I’ve been drunk for three days; and I’da been drunk four if I’da had the money. Don’t I never mean for to go to church? No, I don’t never mean for to go to church. I shouldn’t be expected there, if I did; the beadle’s too gen-teel for me. And how did my wife get that black eye? Why, I give it her; and if she says I didn’t, she’s a lie!”

He had pulled his pipe out of his mouth to say all this, and he now turned over on his other side and smoked again. Mrs. Pardiggle, who had been regarding him through her spectacles with a forcible composure, calculated, I could not help thinking, to increase his antagonism, pulled out a good book as if it were a constable’s staff and took the whole family into custody. I mean into religious custody, of course; but she really did it as if she were an inexorable moral policeman carrying them all off to a station-house.

Ada and I were very uncomfortable. We both felt intrusive and out of place, and we both thought that Mrs. Pardiggle would have got on infinitely better if she had not had such a mechanical way of taking possession of people… We both felt painfully sensible that between us and these people there was an iron barrier which could not be removed by our new friend. By whom or how it could be removed, we did not know, but we knew that. Even what she read and said seemed to us to be ill-chosen for such auditors, if it had been imparted ever so modestly and with ever so much tact…

We were much relieved, under these circumstances, when Mrs. Pardiggle left off.

The man on the floor, then turning his head round again, said morosely, “Well! You’ve done, have you?”

“For to-day, I have, my friend. But I am never fatigued. I shall come to you again in your regular order,” returned Mrs. Pardiggle with demonstrative cheerfulness.

Mrs. Pardiggle then leads the way out to visit another cottage, but Ada and Esther remain behind to speak to the mother holding the sick baby. Dickens has been often accused (and rightly) of rank sentimentalism at times, but the scene that follows is only poignant. Even as the girls come up to the mother, the baby dies. Ada breaks down in tears at what has happened and her compassion gives the mother the freedom to weep. Then someone new enters the house:

An ugly woman, very poorly clothed, hurried in… and coming straight up to the mother, said, “Jenny! Jenny!” The mother rose on being so addressed and fell upon the woman’s neck.

She also had upon her face and arms the marks of ill usage. She had no kind of grace about her, but the grace of sympathy; but when she condoled with the woman, and her own tears fell, she wanted no beauty. I say condoled, but her only words were “Jenny! Jenny!” All the rest was in the tone in which she said them.

How often are Christians like Mrs. Pardiggle? How often are we officious, overbearing, arrogant, utterly ignoring the needs of people right in front of us in our haste to share the message that we have decided is far more important. How often do we ignore the humanity of the people we believe it our duty to help, and by making them into a caricature in our minds, by exaggerating their vices so that we may feel ourselves superior to them, ending up a caricature ourselves, disconnected from the compassion and empathy that makes us human. How often does the Church act like an “inexorable moral policeman”, mechanically taking possession of hurting people and commanding them to improve themselves, before abandoning them in their woundedness?

What we need is an old woman, bearing bruises and scars herself, who comes in and embraces us, weeping with us, murmuring our names with grief and tenderness and love.

4 thoughts on “The Spirit of Mrs. Pardiggle”